I attended the ICORating Investment Summit in New York last week. It was a day of great 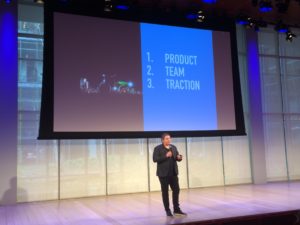 sessions and panels featuring journalists, investors and those behind successful ICOs.

One session I was especially interested in was John Biggs’ talk on marketing. He is a veteran tech reporter who spent years at the New York Times and now contributes to TechCrunch.

John was in rare form and gave a nice jaded journalist spiel. He was an early crypto observer and writer (see his 2015 story on crypto mining with Raspberry PI), and seemed as equally wowed by the tech’s possibilities as he was appalled by ICO marketing.

“You’re doing it all wrong!” John lectured. The take no prisoners, seen it all attitude was kind of amusing until John lit into PR: “PR people are awful, don’t hire them!”

It would be easy to get annoyed if he wasn’t so damned funny, the guy should be a standup comic. Plus, John made great points and, let’s face it, the PR field does have some bad actors who make life harder for the rest of us; and thick skin is a job requirement.

(I will say, however, that it gets a bit exhausting hearing people who don’t work in a field lecture about it as I pointed out in Tech Startups, get PR Help for the Love of God. Heck, since I read a lot and work with journalists, maybe I can get a gig schooling on reporting).

John had a lot to say about the do’s and don’t’s of pitching him (and by extension other top tier reporters) your ICO. Except where noted, I’ve paraphrased, they’re not direct quotes.

John opined that a press embargo is a relic dating back to the days when press releases were sent by snail mail.

“No one tells a proper story,” John complained.

This is largely because PR people and even founders don’t understand ICOs, he said. The fact that it is an ICO is apparently the least interesting part. What is interesting?

John pointed to a disheartening number in a red bubble – 1,300 plus some odd. It equals the unread emails in his inbox – in just two hours! After which John cleans email house and starts fresh.

(Note: So, if sending John an email is a long shot, what else can you do to get his attention? Attend conferences like this one, for starters, and find a chance to speak with him. There are other tactics for getting through to busy reporters that we’d be happy to discuss further – see the end of this post for more info.)

An ICO is not…

A get rich quick story. A way to raise crazy C-round cash when you should be at the A, B or seed rounds.

“You get what you get… and don’t get upset.”

It’s a great quote from John. He and other journos don’t owe you a story. That is why it’s called earned media!

John’s talk may seem disheartening – but it was sobering and much needed advice for a space prone to excess. Plus, it really does seem like he has a heart for the true innovators and disruptors – and wants them to succeed. (John closed by saying that he wants your token offering to be more like a cool DeLorean than a plane crash).

While Fusion PR can’t promise John Biggs, or any others (you get what you get, remember?), we do have ideas and tactics that can be effective in promoting ICOs and other startup stories.

Check out this link for more info:

ICOs: the New Press Release for a Blockchain World